Every month we will try to post a list of books about the Middle Ages that caught my eye in the bookstore.

The Birth of the West: Rome, Germany, France, and the Creation of Europe in the Tenth Century

The tenth-century tends to be a somewhat overlooked period in medieval history, so I am intrigued by this lengthy (496 pages) account of what was going on in continental Europe, which includes some of strangest popes in history and the emergence of states from the Carolingian Empire.

Click here to read an excerpt from the Publisher's site

Before Galileo: The Advancement of Modern Science in Medieval Europe 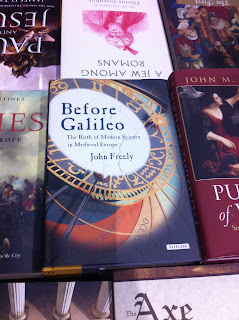 The First Muslim: The Story of Muhammad

From the publisher: Hazleton follows the arc of Muhammad’s rise from powerlessness to power, from anonymity to renown, from insignificance to lasting significance. How did a child shunted to the margins end up revolutionizing his world? How did a merchant come to challenge the established order with a new vision of social justice? How did the pariah hounded out of Mecca turn exile into a new and victorious beginning? How did the outsider become the ultimate insider?

The History, by Michael Attaleiates

I quite enjoy reading through primary sources - the stories written by the the eyewitnesses of the Middle Ages - so I picked up this edition and translation of a Byzantine chronicle that covers the years 1034 to 1079, including the Battle of Manzikert (1071).  I hope to post a review of the book on Medievalists.net in a few weeks.