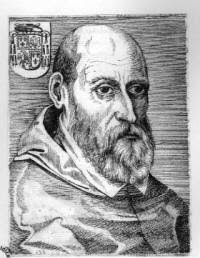 The Fordham Medieval Studies Program closed out its 2009 Spring Lecture Series with a look at one of the odder figures from 16th-century Italy.

Ippolito I of Este, a cardinal who lived from 1479 to 1520, never really took his religious duties seriously, and instead, spent an inordinate amount of time hunting, according to Enrica Guerra, Ph.D.

From early on, Guerra said, it was obvious that something was amiss with Ippolito, who was sent by his parents, Ercole I of Este and Eleonor of Aragon, to be schooled from 1487 to 1492 in Hungary at the court of Beatrice of Aragon, his aunt. As an example, Guerra cited a correspondence from his teachers to his parents:

Once he comes back from school he never rests, but he never tires himself out. And he has a natural tendency toward religious custom and toward humanistic studies.

“We cannot know if these words reflect reality or not,” Guerra said. “Although Ippolito surely attended school and religious functions, it is hard to believe that he did this with the passion that is described in these letters. The ambassadors and the men of Ippolito’s court could not write about his weak bent for studying since he was under the care of his aunt, for whom they worked.”

In fact, efforts to shield Ippolito’s parents from his dalliances with the bow and arrow were for naught, and he felt compelled to explain himself:

You wrote to me you have heard about the inconveniences created by my hunting and killing chicken and geese, and I am sorry that you are worried about this because it is against my desire to give you pain. But I would like you to know that what you were told is not so bad because it has just happened only one time and I gave an order to pay for the dead animals at double their value.

Believing this had happened just one time, we passed over it; but again we have heard, on many occasions, that you continue your hunting in this way and it seems very bad behavior and we cannot allow you to continue it.

“It seems like Ippolito did not care about his behavior, and the title of cardinal was unimportant to him compared to his passions,” she said. “The cardinals were like princes in the Roman Church. That is why the reaction of Ercole seems strange. He was like an old father who is not able to understand that he was living in a new period, and continued to act as if it were 20 years earlier.”

Ippolito’s obsessions did not seem to bother his brother, Alfonso, who became duke of Ferrara, Modena and Reggio after their father’s death in 1505.

Like Alfonso, Ippolito joined the Cambrai League, which was created to fight against the Republic of Venice. His actions were instrumental in a victory over the Venetian fleet in a battle in Polesella in 1509.

Stationed alongside the River Po, Ippolito’s artillery forces waited until just before dawn, when the river raised the Venetian ships to the level of the embankment. When they attacked, the result was devastating; their forces sank two ships immediately.

“It seems that Ippolito had forgotten the chicken and geese to turn his attention to something that was more important for the duchy of Ferrara,” Guerra said. “The Battle of Polesella represents the height of military achievement by Ippolito.

“It is too early to say how Ippolito’s love for hunting and weapons may have influenced his political and ecclesiastical life, because there are still too many sources that I must analyze,” she said. “But it can be said that Ippolito’s religious activity was not impressive.”

Guerra, a medieval fellow at Fordham and a postdoctoral researcher at the University of Ferrara, delivered the presentation, “A Mania for Killing Geese and Chickens: The Life of the Cardinal Ippolito of Este” on April 20.