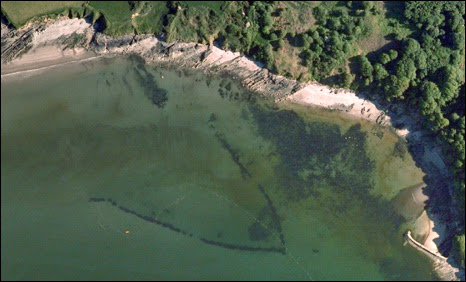 A large medieval fish trap has been found in an estuary in Pembrokeshire, Wales, after it was spotted in aerial photographs on Google Earth. The 260m (853ft) man-made V-shaped structure could be more than 1,000 years old, experts believe.

They think it was designed to catch migratory fish, such as salmon and sea trout going up the River Teifi at Poppit in Pembrokeshire. Research is being undertaken between Pembrokeshire College and the Dyfed Archaeological Trust to find out more.

The structure is about 3ft wide and protrudes about 12in above the underwater sand, although the water in it would have been shallower 1,000 years ago, when the sea level was lower. Fish would have swum into the estuary but become trapped in the structure as the water ran out with the outgoing tide.

Dr Ziggy Otto, lecturer in the coastal zone and marine environment research unit at Pembrokeshire College, said: "There can be but little doubt that this rather impressive - and quite apparently man-made - structure is an ancient fish trap. The structure is entirely underwater (at all stages of the tide); it has never been surveyed, but is approximately 260m long, and is possibly made of locally quarried rock, although use of boulders carried in during the last glaciation cannot be ruled out either. Its age is unknown, but because of its now entirely sub-tidal position, this fish trap is very old, possibly dating back more than 1,000 years, when sea level was lower and the entrance to the Teifi Estuary further towards the Poppit side. This structure is a true conundrum, and certainly worthwhile investigating further, because it forms part of the historic and cultural seascape of the area.

He adds: "It would have taken a number of fishermen to work on a structure of this size. The fish were herded into the trap and when the tide went out they would be scooped out with nets.''

Louise Austin, of the Dyfed Archaeological Trust, said the find was very important.
"Fish traps were a widely used means of catching fish in the past which made a significant contribution to the economy of many coastal and estuarine communities," she said. "Today only a few are known to survive in Wales. Recent aerial survey work has identified a handful of additional sites, such as the Poppit example, but there are few opportunities to investigate and record in detail these important underwater sites."

An exploratory dive has already been undertaken by Dr Otto, together with Jennifer Jones, a scientific diver. Ms Jones said: "The section of the fish trap we dived on in very poor visibility is buried in the sand."

She said the rocks forming the trap are now covered in worms, algae and sea anemones.
"This fish-trap has therefore metamorphosed from an entirely man-made structure to a naturally functioning reef, which adds to the biological diversity not only of the local area but also to that of the Cardigan Bay Special Area of Conservation as a whole," she added.

Further dives are now planned to complete a full underwater survey of the fish trap.