Here are some news stories from the medievalverse, and a few from beyond it...

An article in the International Journal of Paleopathology shows that many Crusaders would have been suffering from worms or other diseases. Test done by two researchers from the University of Cambridge at Saranda Kolones castle in Cyrpus showed that two species of parasite, the roundworm and the whipworm, were prevalent among the crusaders. The castle was built after the Third Crusade and abandoned in 1222.

Evilena Anastasiou and Piers D. Mitchell write that "the discovery of these parasites highlights how medieval crusaders may have been at risk of malnutrition at times of siege and famine, as these worms competed with them for nutrients."

You can read more about this story from Reuters.

The article 'Human intestinal parasites from a latrine in the 12th century Frankish castle of Saranda Kolones in Cyprus' is available here.

One stone at a time

While we have reported on groups in France and Arkansas that are building medieval castles, we now have a team of 25 workers in Germany who have just started constructing a replica of a ninth century monastic settlement and town. Bert Geuten is leading the effort to build the medieval site near the southern German town of Meßkirch in Baden-Württemberg. Because they are using authentic historical tools and techniques, it will take over 40 years before the project is complete, which will include a 2,000 seat cathedral.

They began last weekend by starting construction on a small church. “In the ninth century the monks would have built a small church first – they didn't want to wait until the cathedral was ready to be able to pray. So we're doing the same,” Geuten explained.

Click here to read the full article from The Local. 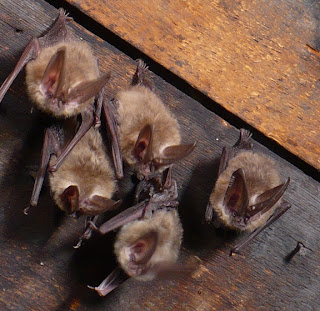 Churches in England are again facing danger, but not from thieves stealing their metal or declining attendance. Instead, bats are the new threat, according to a report in the Daily Telegraph. An environmental directive from the European Union prohibits building owners from killing bats or destroying their roosts, and this is apparently leading to church interiors being contaminated with bat droppings.

Tony Baldry, a Member of Parliament who officially speaks for the Church of England, said, "the church of St Peter ad Vincula at South Newington in my own constituency has some very fine, almost unique, medieval wall paintings which seem to have been spared Thomas Cromwell's men. But having survived the ravages of the Reformation they are now threatened by bat urine. And these are irreplaceable parts of our natural heritage."

Click here to read the article from Daily Telegraph

One of my daily reads The Atlantic magazine occasionally has articles related to history. Last month, they looked at ancient cursing with Futuo! How the Romans Swore. It focuses on the new book, Holy Sh*t! A Brief History of Swearing by Melissa Mohr, and explains the meaning behind Latin words such as futuo, landica, cinaedus, mingo, cacare and verecundum. You can read that article here.

What it takes to run the IMC 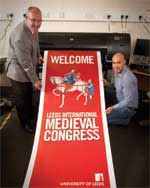 The International Medieval Congress is taking place at the University of Leeds from June 30th to July 4th. Over 2000 people will be attending (I wish I was there too). Anthony Lowe, event manager for MeetInLeeds is in charge of making sure everything goes smoothly “This has been three years in the planning as it is the largest conference we have hosted on the campus,” he explains to ConferenceNews. “It’s been great working with all the different departments to create a medieval campus, with special exhibitions in the university art gallery, library and academic meeting rooms, as well as themed menus and medieval street food."

He adds, “It’s going to be incredibly busy but we’re extremely well-prepared for it and will be working hard to ensure that everyone has a fabulous experience and remembers their medieval experience for many years to come. Leeds is a very attractive campus and we are looking forward to showing it at its very best.”

Click here to read the full article from ConferenceNews

Social Networking in the 1600s

Tom Standage is the author of the forthcoming book, Writing on the Wall: Social Media — The First 2,000 Years. In this article from the New York Times, he writes about how the coffeehouse was the social-networking site of the 17th century. He explains:

People went to coffeehouses not just to drink coffee, but to read and discuss the latest pamphlets and news-sheets and to catch up on rumor and gossip. Coffeehouses were also used as post offices. Patrons would visit their favorite coffeehouses several times a day to check for new mail, catch up on the news and talk to other coffee drinkers, both friends and strangers. Some coffeehouses specialized in discussion of particular topics, like science, politics, literature or shipping. As customers moved from one to the other, information circulated with them.

You can read the article here.

The Rise of the Novel

Staying in Early Modern England, Penn State News has an interesting profile of Leah Orr, a specialist in 18th-century literature. She just completed her PhD on Did the Novel Rise? Fiction and Print Culture in England, 1690-1730, which "rebuts the longstanding notion that the novel as we now know it became a recognized form and rose to prominence during that time period. That conception of early fiction, she argues, is based on close readings of a few famous texts by major authors, such as Daniel Defoe and Aphra Behn, and neglects the broader literary context in which those texts were written and first read."

Video: Students studying Archaeology at Queen's University take part in an excavation which discovers a Medieval Lime Kiln, which may have been used during the construction of Dundrum Castle.