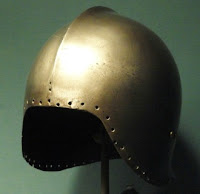 Michael Vlahos offers a fascinating article in The Atlantic about how "hundreds of thousands of lives" in World War I could have been saved if soldiers wore helmets and body armor just as medieval knights did hundreds of years earlier.

He writes, "medieval armorers and men-at-arms knew a secret that would have spared perhaps 30 percent of those who died in battle. We have the evidence right at the Metropolitan Museum itself."

For example, when helmets were introduced (two years into the war) the British and French made them in a way that wasn't very effective at protecting the head and neck. Meanwhile, the Germans based their design on the medieval Salade (or Sallet) helmet, which was much better preventing injuries or deaths.

Bashford Dean, an expert on medieval armor at the Metropolitan Museum in New York, even designed a battle harness that would offered strong protection against shrapnel from exploded bombs and even bullets from pistols, but the American army never made use of it when they entered the First World War.

You can read more at Could Body Armor Have Saved Millions in World War I?