When Conrad Rudolph, professor of art history at the University of California, Riverside, began exploring the complexities of the 12th century mural "The Mystic Ark," he expected to finish his work in two or three years.

Twenty years later, Rudolph has completed research that includes the digital reconstruction of a mural that is regarded as the most complex work of art from the Middle Ages.

That digital reconstruction of "The Mystic Ark" will be reproduced in life size - about 13 feet tall and 15 feet wide - and displayed this month at the National Gallery of Art in Washington, D.C. Rudolph will deliver two lectures about the mural at the museum on Dec. 14 and 15.

"The Mystic Ark" was conceived by the theologian Hugh of Saint Victor, from the monastery of Saint Victor in Paris. Hugh, whose writings are compared to those of Augustine, likely painted the mural on a cloister wall to teach advanced students, Rudolph said.

The mural exists today only in the detailed, 42-page description written by one of Hugh's students. More than 80 of the parchment manuscript copies of this text have survived and recreate in words a painting that depicts all time, all space, all matter, all of human history, all of human learning, and all of human spiritual endeavor from the beginning of time until the Last Judgment.

"Hugh painted this as the basis of an advanced seminar that dealt with religious issues of a politically sensitive nature," said Rudolph, who described Hugh as positioning himself between learning that was based in religion and learning that was influenced by science. "This was that moment in Western culture when secular learning was just beginning to be taken up for its own sake, rather than necessarily being directed specifically toward salvation and the study of the Bible," he said.

"In regard to art, it was precisely at this moment that the multiplication and systematization of imagery led to the creation of the Gothic portal, the most significant, fully indigenous expression of Northern European, public figural art of the Middle Ages, an achievement that bridged the gap between literature's potential for complex expression and such expression in large-scale public art," Rudolph said. "My work shows that the actual vehicle for this was the painting of 'The Mystic Ark.' "

Both the text and the painting are among the most unusual sources we have to understand medieval artistic culture and its polemical context, he said. "The painting is an expression and projection of a very specific conception of the history of salvation, one that was at the same time used to appropriate the more prestigious - and secular - neo-platonic thought of the time."

On the basis of this manuscript, Rudolph digitally reconstructed the painting using hundreds of individual images from a contemporary work of art, images that range from signs of the zodiac, celestial choirs and a map of the inhabited world to the biblical stories of the Exodus and the Ark of Noah, the arrival of Jesus Christ, and the Last Judgment. The stylistically consisten images were then painstakingly recombined digitally - cut up, flipped, altered, joined - over a period of nearly eight years with the help of a number of digital artists, including one former student of Rudolph's who is now at the University of Cambridge.

"The more I study this the more astonishing I find it," Rudolph said.

As Rudolph began the digital restoration process nearly eight years ago, he searched through hundreds of prototypes so a digital artist in Cambridge could create images that are consistent stylistically with medieval art.

"It's been an overwhelming project," Rudolph said. "It's so big that I've already had a small 'pre-book book' come out on it, as well as a major article. I expect that there will be another small book also appearing before the main one."

Rudolph's digital reconstruction of "The Mystic Ark" is funded by a research fellowship from the UCR Academic Senate and Center for Ideas and Society, a Guggenheim fellowship and a Kress Foundation grant. 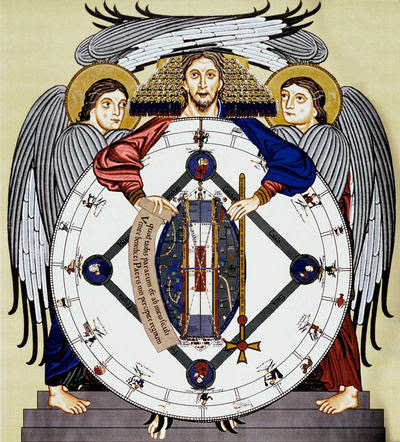