Ireland promotes the Viking Triangle of Waterford as a tourist destination 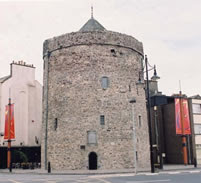 Ireland's government has announced that funding of almost €9 million has been provisionally allocated under Fáilte Ireland's Tourism Capital Investment Programme for the development of museums and other tourist attractions in the centre of Waterford, known collectively as the Viking Triangle.

The chairman of Fáilte Ireland Mr. Redmond O’Donoghue said “this major funding for the Viking Quarter has the potential to transform Waterford and place it centrally on every visitor’s map. With this capital money, we can develop a cultural island of museums and attractions at the heart of the city which will prove a magnet for those who wish to experience and learn more about our country. In these challenging times, it is incumbent on us all to innovate our way through recession and towards recovery. This project is a perfect example of taking what we have and applying the right mix of resources and imagination.”

The Viking Triangle, the name given to the area of Waterford first settled by the Vikings in 914 AD, contains within its three sides the oldest parts of the city itself. Within the Viking Triangle are 1,000 years of Irish urban heritage.

Many monuments still adorn the old city, which testify to its wealth as a medieval port and to the success of the city during the eighteenth century. The Viking Triangle extends along a 500 metre length and has at its apex Reginald’s Tower, the only monument in Ireland named in honour of a Viking.

The Triangle is bordered by the River Suir, the Mall and Cathedral Square, and within its confines it encompasses practically every period of architecture to have come to Waterford since the arrival of the Vikings. Along with its medieval and classical architecture, Waterford possesses a remarkable collection of internationally important museum objects that span over a thousand years of the city’s history.

Mary Hanafin, the Minister for Tourism, Culture and Sport, said "I am very pleased to announce such a significant investment in providing an iconic cultural and heritage attraction for Waterford City. This investment is a key part of our strategy to drive tourism in the city and the southeast region. I know the tourism industry continues to battle a very difficult international economic climate as demonstrated through the latest statistics regarding overseas visits.

"The Government, in partnership with the industry, is meeting this challenge and has already clearly signalled its intent to invest for the future of Irish tourism through the trebling of tourism capital funding in 2010.”

Minister Hanafin added “the enhancement of our tourism attractions, taken together with the concerted marketing drive being undertaken by Tourism Ireland and the sustained investment in tourism enterprise support by Fáilte Ireland will enable not only tourism to recover to but to play a central part in the broader economic recovery.”

The project announced today was approved by the Fáilte Ireland Authority, subject to being able to comply with a number of specific requirements of Fáilte Ireland prior to the signing of a grant contract.

Click here to read the article: The historical importance of Viking-Age Waterford.