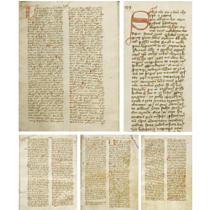 
Culture Minister, Barbara Follett, has placed a temporary export bar on a medieval historical manuscript known as The Courtenay Compendium. This will provide a last chance to raise the money to keep this exceptional manuscript in the United Kingdom.

The Minister's ruling follows a recommendation by the Reviewing Committee on the Export of Works of Art and Objects of Cultural Interest, administered by the Museums, Libraries and Archives Council (MLA). The Committee recommended that the export decision be deferred on the grounds that the Compendium is of outstanding significance for the study of medieval historical scholarship.

The Courtenay Compendium is a late 14th-century English decorated manuscript on vellum containing significant texts of British, Near-Eastern and Far-Eastern historical accounts, including the Encomium of Queen Emma and The Travels of Marco Polo. Some of the texts are rare, or even unique versions. The Compendium may have been assembled by a monk in the Augustinian priory at Breamore in Hampshire in order to provide his house with a scholarly collection of important historical texts. These were possibly copied from sources in the library of Glastonbury Abbey, the chief medieval library in the south west of England. At the Dissolution of the Monasteries, Braemore Priory was granted to Henry Courtenay, Marquess of Exeter. This volume was certainly in the possession of his descendants in the eighteenth century.

The most significant text in the Compendium is the unique medieval witness to the revised version of the Encomium of Queen Emma, an anonymous biography commissioned by its subject in order to promote the political interests of her offspring. Emma of Normandy, great-aunt of William the Conqueror, was the wife of two 11th-century English kings, first of Aethelred II, known as "the Unready" and, after his death, of his successor, the Danish Cnut. She also bore two sons who later became king, Harthacnut and Edward the Confessor.

The inclusion of eastward-looking texts in the Compendium adds to its importance, as they occur in few medieval English manuscripts. Marco Polo's account of his travels on the Silk Road was central to the West's perception of Asia for many centuries, but is known in only four other manuscripts of English origin. The State of Saracens and Mohammedans by William of Tripoli, a Dominican monk in the convent of Acre in the 13th century, is a positive presentation of Muslim life and faith. These texts are key to understanding English perceptions of the Near and Far East during the Middle Ages.

Dr Christopher Wright, Reviewing Committee member, said: "The Courtenay Compendium, which has hitherto been unknown to scholars of Anglo-Saxon history, is a rare and remarkable discovery. It is a major source for the study both of pre-Conquest English history, and of medieval England's perceptions of the wider non-Christian world."

The decision on the export licence application for the Compendium will be deferred for a period ending on 3rd May inclusive. This period may be extended until 3rd August inclusive if a serious intention to raise funds with a view to making an offer to purchase the manuscript at the recommended price of GBP937,250 is expressed. Offers from public bodies for less than the recommended price through the private treaty sale arrangements, where appropriate, may also be considered by Barbara Follett. Such purchases frequently offer substantial financial benefit to both parties by the sharing of tax advantages.

Anyone interested in making an offer to purchase the Courtenay Compendium should contact the owner's agent through: