Andy Wilkinson has recreated a miniature version of the Bayeux Tapestry - the eleventh-century embroidery that depicts William the Conqueror's invasion of England and victory at the Battle of Hastings.  It took him 18 years to sew the 40 foot-long replica and he estimates that he spent about 10,000 hours to complete it. 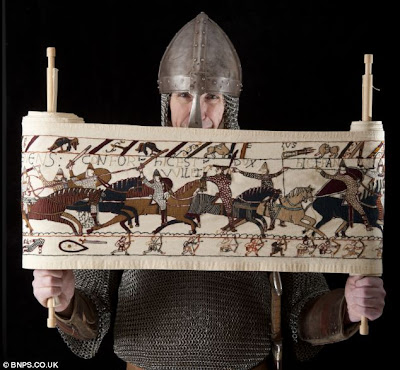 In an article in the Daily Mail, Mr. Wilkinson explains, "I work a lot of night shifts and used to come home and find myself with not a lot to do for a few hours. I had seen a copied section of the tapestry at a medieval fair and thought that if they can do that so can I.

"Having never done a tapestry before, I came home and found a picture and just started to draw and sew. I had no formal training in sewing or drawing. I just drew the outlines of figures and animals like the horses onto a piece of calico material and then just stitched it."

This version of the Bayeux Tapestry depicts the portion of the Battle of Hastings. It will be going on display at Battle Abbey, the site of the battle that was fought in 1066.

Click here to learn more about the Bayeux Tapestry