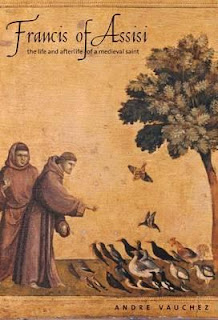 “Why you?” a man asked Francesco di Bernardone, known to us now as St. Francis of Assisi. Francis (1181/2-1226) was scrawny and plain-looking. He wore a filthy tunic, with a piece of rope as a belt, and no shoes. While preaching, he often would dance, weep, make animal sounds, strip to his underwear, or play the zither. His black eyes sparkled. Many people regarded him as mad, or dangerous. They threw dirt at him. Women locked themselves in their houses.

Francis accepted all this serenely, and the qualities that at the beginning had marked him as an eccentric eventually made him seem holy. His words, one writer said, were “soothing, burning, and penetrating.” He had a way of “making his whole body a tongue.” Now, when he arrived in a town, church bells rang. People stole the water in which he had washed his feet; it was said to cure sick cows.

Years before he died, Francis was considered a saint, and in eight centuries he has lost none of his prestige. Apart from the Virgin Mary, he is the best known and the most honored of Catholic saints. In 1986, when Pope John Paul II organized a conference of world religious leaders to promote peace, he held it in Assisi. Francis is especially loved by partisans of leftist causes: the animal-rights movement, feminism, ecology, vegetarianism (though he was not a vegetarian). But you don’t have to be on the left to love Francis. He is the patron saint (with Catherine and Bernardino of Siena) of the nation of Italy.

Consequently, a vast number of books have been written about him. The first of the biographies appeared a few years after his death, and they’ve been coming ever since. Two more have recently appeared in English. One, Francis of Assisi: The Life and Afterlife of a Medieval Saint (Yale), is by André Vauchez, a professor emeritus of medieval studies at the University of Paris. The book appeared in France in 2009 and has now been published in English, in a translation by Michael F. Cusato. The other volume, Francis of Assisi: A New Biography (Cornell), is by Augustine Thompson, a Dominican priest and professor of history at the Dominican School of Philosophy and Theology at the Graduate Theological Union in Berkeley. The two books show that the Church is still trembling from the impact of this great reformer.

Click here to read this article from the New Yorker Magazine