Peasants' Revolt: The time when women took up arms 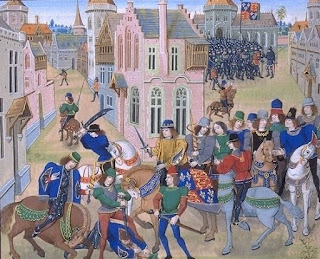 Until now the Peasants' Revolt of 1381 is largely believed to have been led by a mob of rebel men, but new research shows women played an important role in orchestrating violence against the government.

Today people are used to the idea of women being in the military. Some are already pressing for the right to fight on the front line. And women fighting as insurgents has been a fact of conflicts from Vietnam to Sri Lanka. But there's a growing feeling historians have overlooked their role in medieval rebellions like 1381's Peasants Revolt.

On 14 June 1381, rebels dragged Lord Chancellor Simon of Sudbury from the Tower of London and brutally beheaded him. Outraged by his hated poll tax, the insurgents had stormed into London looking for him, plundering and burning buildings as they went.

It was the leader of the group who arrested Sudbury and dragged him to the chopping block, ordering that he be beheaded.

Her name was Johanna Ferrour.


Click here to read A Hotbed for Dissidence: Southeast England in the Peasants’ Revolt of 1381