Painted-over murals were thought to be irretrievably lost because conventional methods are seldom suitable to rendering the hidden works visible without causing damage. Research scientists now aim to reveal the secrets of these paintings non-destructively using terahertz beams. 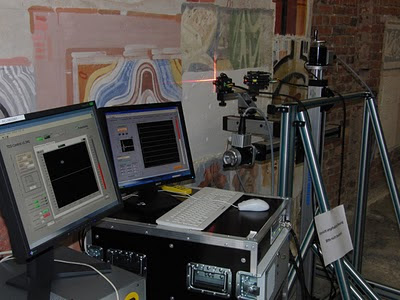 Many church paintings are hidden from sight because they were painted over centuries ago. In the 16th century, for instance, Reformation iconoclasts sought to obscure the religious murals, while in later times the iconoclast images often were painted over once again. Several layers of paintings from various epochs can now be found superimposed on top of each other. If mechanical methods are used to uncover these pictures there is always a risk that the original work will be damaged. What’s more, the more recent layers and pictures on top of the original, which are also worthy of preservation, would be destroyed.


Research scientists at the Fraunhofer Institute for Material and Beam Technology IWS in Dresden are now working on a non-destructive method for rendering these works visible, which involves the use of terahertz (THz) radiation. In the TERAART project funded by the German federal ministry of education and research (BMBF) they are cooperating with Dresden University of Technology, the FIDA Institute for Historic Preservation in Potsdam and the Dresden Academy of Fine Arts.

"We use THz radiation because it can penetrate the plaster and lime wash even if the layer is relatively thick. Unlike UV radiation for example, THz radiation does not damage the work of art. Infrared beams cannot be considered because they do not penetrate deep enough. Microwaves offer no alternative either, because they do not achieve the necessary width and depth resolution," explains Dr. Michael Panzner, scientist at the IWS.

A mobile system that can be used anywhere was developed to conduct the examinations. It consists of a scanner with two measuring heads which travels contactlessly over the wall. One measuring head transmits the radiation, the other picks up the reflected beams. The researchers were supported by the Fraunhofer Institute for Physical Measurement Techniques IPM, which built the adapted THz component.

"To produce the THz radiation we use a femtosecond laser incorporating the design principle of a fiber laser. The THz time domain spectroscopy technique applied by us utilizes the short electromagnetic pulses with a duration of just one to two picoseconds produced by the femtosecond laser. Each layer and each pigment reflects these pulses differently so that both a picture contrast as well as depth information can be obtained," says Panzner. "The measured results provide information for example about the thickness of the layers, what pigments were used and how the colors are arranged. A specially developed software system puts the measured results together to form a picture displaying the structure of the concealed paintings."

On a test wall, on which paintings in various types of paint were painted over with distemper, the scientists have already succeeded in revealing the structures of the concealed pictures. The next step will be to conduct a practical test in a church. The experts are also confident of being able to use THz radiation to detect the presence of carcinogenic biocides on and in works of art made of wood or textiles. "Preservationists will be very interested in our reveal-all-scanner for works of art," affirms Panzner.