Did a Meteorite cause a mini ice-age in the sixth century? 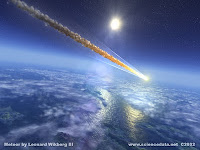 Pieces of a giant asteroid or comet that broke apart over Earth may have crashed off Australia about 1,500 years ago, says a scientist who has found evidence of the possible impact craters. This created a foggy haze around the earth for several years, leading to cooler temperatures worldwide.

Dallas Abbott of Columbia University's Lamont-Doherty Earth Observatory presented her theory at a meeting of the American Geophysical Union in late 2009. It offers an explanation why during the mid-sixth century, Europe and Asia experienced a severe and protracted episode of cooling, which some consider to have been a mini ice-age.

The Byzantine historian Procopius recorded in 536 AD that "it came about during this year that a most dread portent took place. For the sun gave forth its light without brightness, like the moon, during this whole year, and it seemed exceedingly like the sun in eclipse, for the beams it shed were not clear nor such as it is accustomed to shed. And from the time when this thing happened men were free neither from war nor pestilence nor any other thing leading to death."

Sources from the time refer to widespread crop failures and famines as the unseasonal weather took hold. The Gaelic Irish Annals recorded 'a failure of bread' from 536 to 539 AD.

Tree ring analysis by Mike Baillie from Queen's University in Belfast also suggested a cool period. He found the Irish oak showed abnormally little growth in 536 and 542. This phenomenon was noted in trees in Sweden and Finland as well.

Dallas Abbott and her team at Columbia University's Lamont-Doherty Earth Observatory have found the first direct evidence that multiple impacts caused the haze. They found tiny balls of condensed rock vapour or "spherules" in debris inside Greenland ice cores dating back to early 536 AD. Though the spherules' chemistry suggests they did not belong to an impactor, they do point to terrestrial debris ejected into the atmosphere by an impact event, Abbott says. "This is the first concrete geological evidence for an impact at 536 AD," she says. The fallout material was also laid down over several years, and some layers were particularly densely deposited. This suggests more than one impactor was involved - probably a comet, because they tend to fragment on their way to Earth.

Abbott and her team have identified two possible underwater craters whose age ranges fit the global dimming event. The first appears to have formed when an object roughly 640 metres wide slammed into the Gulf of Carpentaria in Australia, and the other when a smaller object crashed into the North Sea near Norway.

Satellite measurements of the Gulf of Carpentaria revealed tiny changes in sea level that are signs of impact craters on the seabed below. Based on the satellite data, one crater should be about 11 miles (18 kilometers) wide, while the other should be 7.4 miles (12 kilometers) wide.

Marine microfossils found with the impact spherules are also consistent with an ocean impact. "There's clearly stuff that has been transported a long distance," says Abbott.

Other scientists are skeptical of Abbott's findings and believe that she is overestimating the number of possible meteorite strikes that have hit the earth in recent centuries. Another widely held theory is that a large-scale eruption from a volcano, similar to the one which destroyed Krakatoa in 1883, sent dust and debris into the atmosphere, which cooled the earth for a number of years.