Fire crews and York minster staff spent the night moving more than 300 panels of stained glass as fire broke out at the minster stonemasons' yard.

About 30 firefighters were involved in the operation at the Minster Yard in Minstergate late on Wednesday night.

The Great East Window, one of the largest areas of medieval stained glass in the world, was being housed in a store room close to where the fire broke out.

Dr John Sentamu, the Archbishop of York, said, "I am glad to say that, apart from the two offices that were damaged, fire officers worked at such great speed that the damage was limited and no one was injured. I am very grateful for the sterling efforts of the local fire service and the Minster Police in this regard."

He added, "It was something of a shock for the stonemasons and glaziers who were returning to work yesterday, but not a great deal of damage has been sustained to the building so for that we must be thankful." 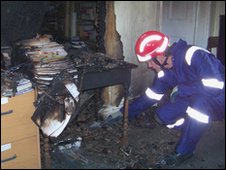 Canon Glyn Webster said the wooden floor of the burning offices could have collapsed on top of the medieval glass panels.

He added: "We don't know the cause. The probability is electrical but that is not certain yet. We are awaiting the full and final report."

Canon Webster, who will be working with a small team of glaziers and staff from the stoneyard, said they could not afford to leave the glass where it was.

He said, "When we took it out we just leaned it against walls or benches. We had to hurry because the fire service was very bothered the ceiling would collapse. It was just an old wooden floor in the office above and the glass was directly below. Apart from the fire the floor was sodden and could have collapsed that way. There was also a real danger of the water started to cascade through which was not good for the glass either."

The Great East Window was built by glazier John Thornton between 1405 and 1408 and is the earliest piece of English art by a known artist. It cost £58, paid by the then Bishop of Durham, Walter Skirlaw. It was removed for a restoration in 2008 that is expected to take 10 years to complete.

The window is roughly the size of a tennis court and is described as the "Sistine chapel of the stained glass world" by the York Minster website.  It is now valued at £27 million.