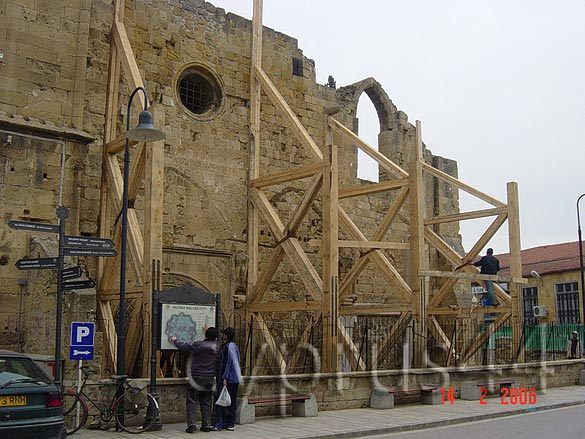 The UNDP Partnership for the Future Programme has completed a five-year-long project on the restoration of the Bedestan, a historic monument located in the mathematical centre of the walled city of Nicosia, formerly known as St. Nicholas Church.

The Bedestan is a uniquely important building - it was originally a 12th century Byzantine church and later used as a covered market place and has thus incorporated throughout the centuries a variety of architectural restructuring.

The restoration and preservation of the monument is one of a number of initiatives within the wider framework of the “Rehabilitation of Old Nicosia”, funded by the European Union and implemented by UNDP Partnership for the Future, reflecting the multicultural life and many historical periods of the city.

The Bedestan has proved to be as much about conservation as about revitalisation, highlighting the importance of cultural heritage preservation. Hence, the restoration project has incorporated an innovative method of anti-seismic support, vocational training as well as a high quality restorative works on an international level.

The building will now function as a multicultural venue and exhibition space for the benefit of the inhabitants of Nicosia and visitors alike.

The study, supervision and works amount to approximately 2 million Euro wholly funded by the European Union. In addition, EVKAF has also contributed financially to the restoration project. The study was aimed at the different phases of the monument's consolidation, its conservative restoration and its re-insertion into the urban setting.

The Bedestan was originally a small sixth-century Byzantine church, before the church of St Nicholas of the English was added to it in the twelfth century. The newly extended church was associated with the cult of Sir Thomas à Becket, the archbishop famously murdered in Canterbury Cathedral in 1170. During the occupation by the Venetians, the church became the Greek Orthodox Cathedral of Nicosia, but the Ottoman invasion changed its usage, as so often happened at that time. The church became a grain store and cloth market, hence its name, and gradually fell into disrepair.

Aspirations are that the Bedestan will become an important landmark for the city of Nicosia, which together with other monuments of cultural heritage will enhance the vision for urban upgrading and reuse of the walled city.