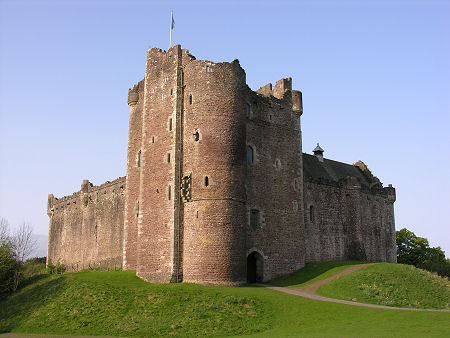 Monty Python has made a permanent return to Doune Castle. Terry Jones, who co-directed comedy classic Monty Python and the Holy Grail, is the voice of the new audio guide introduced this week.

Much of the movie was filmed at Doune and it has been a place of pilgrimage for fans ever since, with HS having hosted a series of Python-themed events there in the past.

Mr Jones, who has presented a number of documentaries on subjects including Roman and Medieval life, said he was delighted to be part of the project. “I have very fond memories of Doune Castle, it’s a fascinating place and the setting is absolutely spectacular. It’s lovely to be involved with the castle again and to have the chance to introduce visitors to its history. The audio guide is designed to give people a real sense of the castle’s social history – what it was actually like to live there in the Middle Ages,” he said.

Jennifer Webster, HS interpretation officer, said: “We were really delighted when Terry Jones agreed to take part. His links to the castle through Monty Python and the Holy Grail and all the work he has done to popularise history on TV made him absolutely ideal. The guide brings out the Medieval social and architectural history of Doune Castle. It looks at the people who were behind its construction, and what life would have been like there. We are really pleased with the results and hope that visitors will enjoy it for many years to come.”

The castle was built in the 14th century for Robert Stewart, Duke of Albany, who ruled all of Scotland while King James I was held captive in England. After Robert’s death the castle, and the regency of Scotland, passed to his son Duke Murdoch.

In 1424 the king returned. Not long after Murdoch was arrested and executed along with his sons – James I believed the duke and his father had done too little to secure his release. Doune Castle was confiscated by the Crown and was used as a royal hunting lodge.